Briton's elders mastered it - 151 years ago! 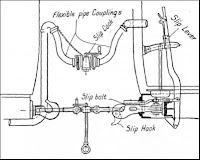 MECHANISM OF THE SLIP. The diagram shows the way in which the slip lever pulls back the bolt that keeps the slip hook closed, and the method of uniting the vacuum brake couplings.
Picture and caption courtesy of Mike's Railway history(2009)


Already in 19th century England small stations were serviced from non-stop express trains. This was achieved by a guard in a rear car uncoupling that car at a precise point from the travelling express. Without motor, the car had to be skillfully coasted into the station. This slip-coach called system, to the credit of our forefathers, operated for 67 years until 1939.